Mt. Ansel Adams from the Lyell Fork of the Merced River 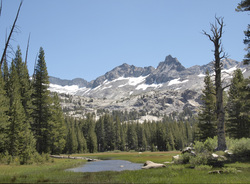 The photograph on the left was made from the meadow in the Lyell Fork of the Merced River. Mt. Ansel Adams is the peak just to the right of center. Some time between 1938 and 1943 Ansel Adams made a very similar image. In 1934 he led a group of Sierra Club members to the peak which they subsequently climbed and then decided to name it after Adams. The naming was not official until 1985 a year after his death. During the 8 days of the backpacking trip I made several hundred stereo photographs. Eventually many of the best ones will be on this site. For now I am uploading my favorite 15 images. You may view them in one of 3 formats:
Parallel
Cross-eyed
Anaglyph (red/cyan glasses)
stereo 3D panorama anaglyphs