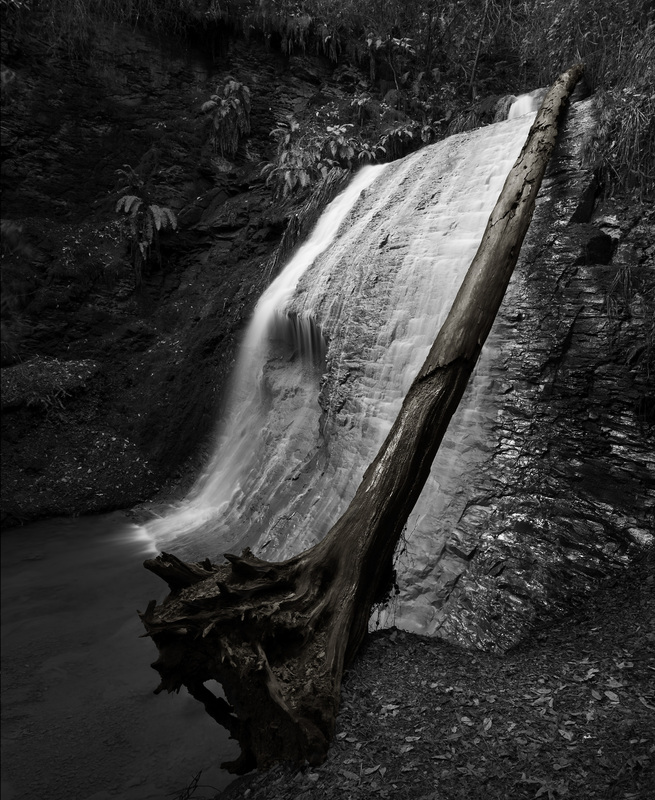 I made this photograph on January 21, 2013 at Big Basin Redwoods State Park in Santa Cruz County. Big Basin is California's first state park, established in 1902. It covers more than 18,000 acres and has many miles of hiking trails. There are a series of spectacular waterfalls along Berry Creek, including the Golden Falls, Silver Falls, and Berry Creek Falls. It is quite a hike to get there, around 12 miles round trip, with a lot of up and down.
For this image I used 2 Sigma DP1 digital cameras mounted next to each other on a panoramic device I constructed which allows the cameras to rotate up or down around what is called the entrance pupil of the lens. This enabled me to tilt the cameras slightly downward to make one part of the image, then slightly upward to make the other part of the image. I blended the two parts of the image together using  a computer program called Panorama Tools Graphic User Interface (PTGUI for short). The exposures were 10 seconds at f/8 (ISO 50). I wanted a long exposure so that the water would look as it does, so I used neutral density filters that blocked the light by 3 stops. The image is black and white, but I made the log slightly brown. You can see the image in the format you prefer by clicking on one of the following: parallel, cross-eyed, or anaglyph (red/cyan glasses).
stereo 3D panorama anaglyphs